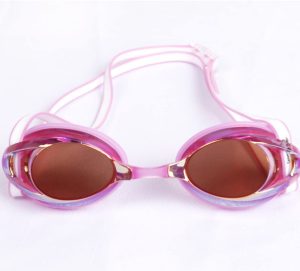 My kids both love swimming! This year I decided to put them in a more serious swim program than the summer one they did every year. At five and six, I really need them to be able to swim! It’s a life skill and I want to feel safe knowing if my kids ever fell in water, they would be able to swim out!

Doing a more serious swim team meant getting all the gear and swim goggles were at the top of the list. Unfortunately I made a rookie mistake of getting the cheapest ones I could find because, well, they were cheap! I got a three pack for $7! What a deal! Not so much. They might as well call them disposable because they literally lasted one time.

Live and learn. I decided swim goggles were something worth spending money on. But how much? After doing a little shopping around I realized I’d have to spend at least $15 to get a decent set. 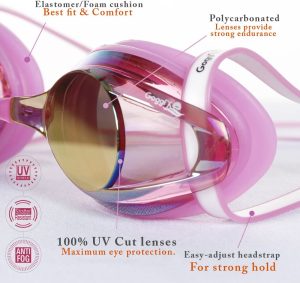 I liked this pair from Gogglx because first, it was in my price range and second, it’s got UV protection with tinted lenses. When swim is in season, the kids are in the pool three times a week, four if there’s a meet. I don’t want their eyes getting burned. So often we remember the sunscreen but forget about eye protection. I’ve burned my eyes before after hours in the pool and there isn’t much more painful than that!

I also liked that these are good for adults AND kids. That way if their dad or I need a pair, we can just borrow theirs with a quick adjustment. I also liked the color options. These blue ones are for my son Reed but of course my daughter wanted pink.